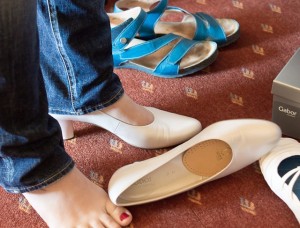 Clinical studies continuously debate over the effectiveness of insoles in treating lower back pain and other medical conditions. Some claim that there is insufficient evidence so far to prove the effects, but new research is emerging to convince those who are unsure.

Some 2013 studies concluded that the use of insoles as a treatment to back pain could not be established as a proven solution. The vague results were primarily due to the small number of trial participants, so researchers recommended conducting a study with more trials.

Following this a similar study was conducted involving a large sample of 1,930 participants. The experiment yielded positive results, supporting claims that liquid orthotic insoles do play a role in managing lower back pain.

Another study conducted by the Orthopedic and Sports Medicine Associates concluded that foot orthotics provide significant symptomatic relief of lower body pains in a large group of runners. They added that effectiveness depended on correct diagnosis and proper fit of inserts.

Several cases have also revealed that shoe inserts aren’t just for overall pain management. A research on the effects of corrective insoles in the UK led to evidence that liquid shoe inserts provide therapeutic effects to improve circulation to feet.

Further supporting this claim, one study found that patients who used therapeutic foot inserts were likely to have lower foot pressure than those who did not use them. In addition, they found sufficient proof that these types of footwear provided relief for diabetic neuropathic foot problems.

Basing on the long list of available literature, we can claim that orthotic insoles, like those we offer at Sole-Mates, are an effective remedy for several foot complaints. Most researchers do admit that shoe inserts are not a standalone cure, recommending a combination of other therapeutic procedures for overall rehabilitation. Certainly, a deeper understanding of orthotics needs to be achieved, but if you are looking for immediate help they are an excellent start.